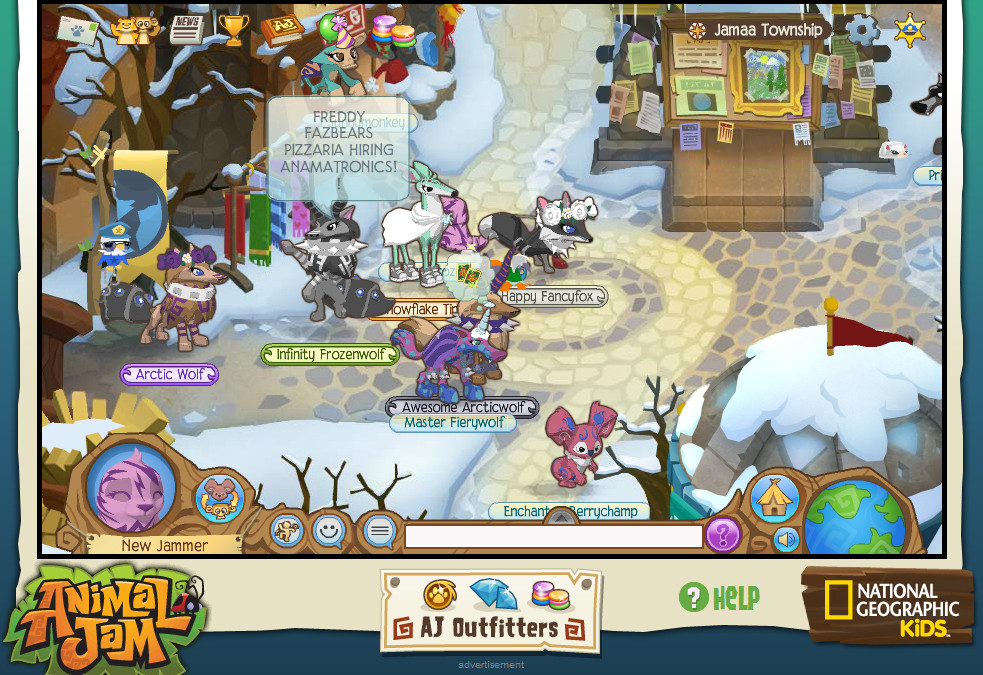 When I think of kid games, the first thing that pops in my head is Neopets. Well, out with the old and in with the new – Animal Jam is great and everywhere you turn in the game, there is a new adventure. It’s amazing how this MMO from National Geographic sucks you in.

In this game there are so many things to do but, more importantly there is learning mixed in with the fun. I want my child to learn through games and National Geographic has a winner on their hands in that department. The journey starts, as many do, in creating a character. The game actually talks to you and leads you through the creation process. There is still reading to do but the narration makes it easy for kids of any age to jump into an MMO with this.

There are a few styles of animals to choose from –  real animals like a penguin, monkey, seal, tiger, panda, koala, wolf or rabbit. To customize the character more, you can pick from a selection of eye types (and colors), body colors and patterns. It helps make the game a unique experience for each kid and there are many costume items you can win or buy throughout the game, to set your pet apart from the herd.

After you pick a character, you get to name it from a pool of allowed names (comprised of one first name and two last names). So, I created a female purple seal with dark purple lightning bolts on her named “Fuzzy FrozenSpirit”.

The game itself is full of safety features – to sign up, you need a parent’s email address and the do’s and don’ts are set out nicely in a list for easy reading for kids.  Everything is heavily monitored. I want my child to be safe on the internet and once again I think Animal Jam has it all under control. They really put a lot of thought into kids having access to an MMO and the safety that concerns parents.

When an account is created, players are able to sign in and start playing the game for free right away. By default, all players are given Restricted Chat, meaning they communicate with other players using only words that are hand-picked and pre-approved from their dictionary.  If a player wants to freely chat with other players, parents can change their chat preferences through the Parent Dashboard. Less-restricted chat and other interactive features in Animal Jam require parental consent, as they strive to uphold the Children’s Online Privacy and Protection Act (COPPA).

This consent can be given during membership purchases with credit cards and by having a Club Member player’s parent write in to give consent. This feature will not be available for players that have not yet purchased a membership.  To ensure all language used in the game is fun and friendly, they utilize a chat filtration system, which is used to update, remove, or add new words to their chat filter on a regular basis.  All in-game activities, chat, and reports are moderated 24/7. If a player is found to be breaking any of the rules, they will take swift action on their account. If it gets to this point, they will do their best to inform parents of any violations of the Animal Jam rules on the account. As you enter the world with your new character, you use the mouse to click on an area and your character moves to that part of the land. Alternatively, you can hold the left mouse button and it will move continuously. You can explore land, forest, ocean, and mountain areas all with unique games and areas to roleplay in.

For example, on Mt. Shiver there is a campfire that kids were sitting around and telling stories. I have to say that a lot of times we, as adult MMO fans, overlook kids and not realise they are the future of the MMO industry. We need to embrace these games and get the kids interested in MMOs and how fun and social they can be. One kid was even looking for others to play as “animatronics” and wanting to make his housing area into a Five Nights at Freddys game – it was great to see.

The dances and backflips the characters do are great and entertaining, and that makes it easy to start up a dance group and have fun! There were kids trading and people asking for free stuff.  It’s teaching kids the value of rare items and money, setting them up for more complex game economies later on in their MMO careers.

Animal Jam has many aspects that I’ve only begun to get to in my weeks of playing it. There are quests that have you stop phantoms from polluting areas and battling against them using nature to trap them (or in the case of venus fly plants, eat them). Quests can be done solo or with a team – you all get the loot that drops (collected by stepping on it). It doesn’t tell you where to go next so you just have to explore and talk to each NPC for clues.

The game has daily spins on a wheel, many mini games in each land, there are ice slides in the mountains, and adopting pets for your pets.  A lot of the mini games I’ve played are addicting, and my favorite is a trivia game that asks you about nature and you jump from the true or false side of the page with everyone else playing.  It was so fun and I even learned a few things along the way. Animal Jam has unique holiday events and I loved the St. Patrick’s Day key find event they had. You had to go around a clover shaped map and find 50 keys. This was easy enough but when I was playing, it happened to be at night when kids were sleeping and you needed other players to help to get 4 of the keys.

It does teach you teamwork, but if you leave the event zone the quest progress resets. I hated that as I was down to 5 keys I needed and with no one on to help, I stopped for the night. Once I returned, I saw I had to do it all over again.

Maybe I’m spoiled by glowing areas in games telling me where the next key is, but this was actually hard finding a clover in a clover field to pick up with no UI indicator to it. After you did get a key, you had to go hunt for a chest and upon opening it there were special items or money.

All the items were shamrock related items for your home or den area like a lucky window, celtic windows, lucky chairs and lamps. It was fun once I played with a team to get the last keys and open the main chest, but I did feel frustrated. Seeing how all the kids were begging for people to help them with the team keys and giving up, it would appear to be an issue.  It was still fun to complete and I felt proud I did it, so the kids do get a sense of pride and accomplishment. There are many educational items throughout the game with videos that pop up to teach you about wildlife and learn as you play.  One thing I found recently is a movie theater with a claw machine and popcorn game.  After you get your popcorn, you go into the main theater to watch a small movie from National Geographic.  I happened to get a small movie with a praying mantis in it with great closeups.  There were just so many unique pieces that lead to being sucked into the world and learning about nature along the way.  Kids will enjoy this game, let them explore and enjoy learning along the way!

The adult MMO’s can take a page from Animal Jam in a few ways – they have a gift shop that you can buy shirts, hoodies, mousepads, tote bags, hats, and binders.  These are all real items that will advertise the game and make a new MMO player proud to show off the game they enjoy.

I wish more games did this, so many times I’d love to get a t-shirt that only seem to be handed out at special conventions. They also have a mobile app called AJ Jump that is linked the Animal Jam player account to earn money in game. You control a kangaroo with a tilt of your phone.