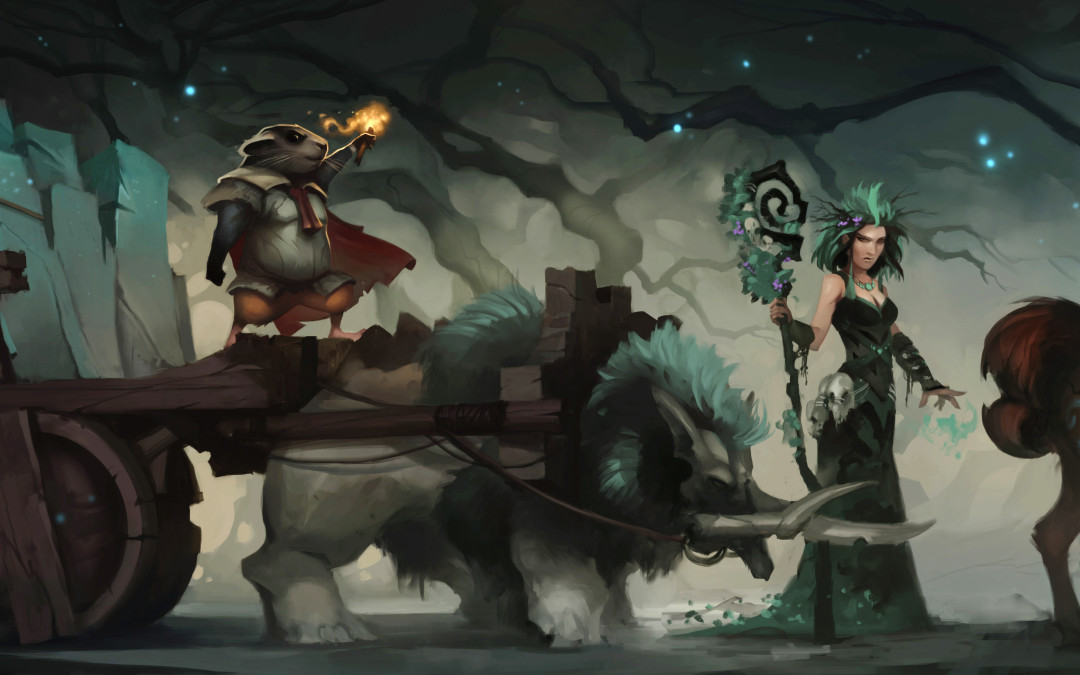 Despite their mechanics still being fairly unclear, there’s an extraordinary amount of excitement circling Crowfall‘s Eternal Kingdoms, with a significant portion of the game’s current fan base looking to capitalize – quite literally – on the economic side-game developing these kingdoms is supposed to bring. A lot of discussion has taken place on how this could come about, so here’s my speculative take on what trading could look like in Crowfall‘s Eternal Kingdoms.

The Eternal Kingdoms are Crowfall‘s take on housing and so much more, with the ability for hundreds of players to live and develop land within each player’s kingdom. There will be castles, shops, PvP areas (set at the ruling player’s discretion), and even limited PvE, though the exact details of all of these features remain hazy.

Resources will be scarce in the Eternal Kingdoms, meaning that building one up will require key resources exported by the victors of the game’s campaign worlds; in turn, these campaign worlds will have limited import rules, keeping success in the Eternal Kingdoms largely segregated from affecting the game’s PvP campaigns – though again, the exact details on this are still unclear. This has lead to the emergence of a wide variety of opinions regarding the importance of the Eternal Kingdoms, ranging from them being unimpactful and glorified housing instances, to them being a fully fledged viable form of play where competitive economists will vie for financial dominance.

Let’s assume, for the sake of this article not being wildly uninteresting, that reality errs on the side of the latter option, and Crowfall‘s Eternal Kingdoms grow, bolstered by the game’s fully player-driven economy, into hotbeds of economic PvP.

Trading in Crowfall won’t be the simple UI game of buying low and selling high without moving an inch that we’ve seen in games with a centralized auction house, as the game simply doesn’t have one. With player-run shops (featuring hireable NPC vendors) acting as the backbone of the game’s economy, buying low and selling high will, at a minimum, require the transport of the goods in question.

Crowfall is said to feature a fairly limiting inventory size, a design decision that will be a factor in both PvP looting and the inclusion of caravans used to transport larger quantities of goods. While trading in the Eternal Kingdoms will more than likely not feature unavoidable PvP, players looking to flip goods between different player shops will certainly want to be travelling with a quantity large enough to necessitate a caravan. This will be extremely cool on a thematic level alone.

Each shop will function as a small, localized economy, meaning that trading in Crowfall will likely resemble trading in games featuring similar economies, such as (best case scenario) EVE Online. As the difficulty in transporting goods increases when travelling to more remote areas, we can expect to see the buy prices set at player shops increase. This should also apply to travelling in between separate Eternal Kingdoms, which is where the potential for speculation really takes off.

While travel between kingdoms as an individual will likely be quick and easy, travel between kingdoms with a caravan holds a lot of potential as a key trading mechanic. It’s possible that we’ll see trade-hubs as place-able structures in the Eternal Kingdoms, where monarchs can set enter and exit points for visitors to use. How exactly these could accommodate caravans provides a lot of food for thought.

As with the other structures in the Eternal Kingdoms, trade-hubs would more than likely come with several ranks of quality upgrades that could bring with them shop space right at the port, better looks, and the ability to accommodate larger caravans (I would love the logistical complexity that caravan-size being a variable amount between kingdoms would introduce for traders).

The potential for the kingdom’s monarch to impose tariffs on traders importing or exporting goods at the trade-hub also brings with it a lot of options, creating a new trade dynamic as well as another potential revenue stream for the ruler of a dominant Eternal Kingdom.

Tools of the Trader

Increasing complexity leads to a greater need for tools to manage a trader’s business. Should this be up to the trader themselves, or should ArtCraft open up the API to allow websites to pull buy and sell orders on player shops? This would eventually lead to tools like the Elite: Dangerous Database, which pulls together all buy and sell prices at stations throughout the game into a searchable database, and is able to dynamically calculate which trade runs are the most profitable at any given time, customizable by the amount of currency available, the amount of inventory space available for transportation, where the player wants to be, and how far (or where exactly) they want to go.

While this negates a lot of trading’s complexity, it’s a god-send for players looking to quickly hop on and start trading, and would likely prove valuable to players looking to develop new shops that aren’t yet well known. Such a system automates a lot of the complexity that could be involved in trading, and brings the economy one-step closer to a global auction house by aggregating sale information into a single consolidated location. I’m not certain whether these would be good or bad things in the context of Crowfall‘s overall economy.

While the specifics are still murky, there’s a wealth of potential in Crowfall‘s Eternal Kingdoms for a robust trade economy, but will it flourish? It’s hard to say. With the Eternal Kingdoms nearly completely economically distinct from the game’s campaign worlds, which are the real focus of the game, having a fully developed and flourishing Kingdom is mostly going to have to be its own reward. There’s no doubt that this will be enough for some players, but, much like everything else about the Eternal Kingdoms, whether or not they’ll be enough remains to be seen.

Have thoughts on how trade in the Eternal Kingdoms should or will play out? Weigh-in below in the comments!