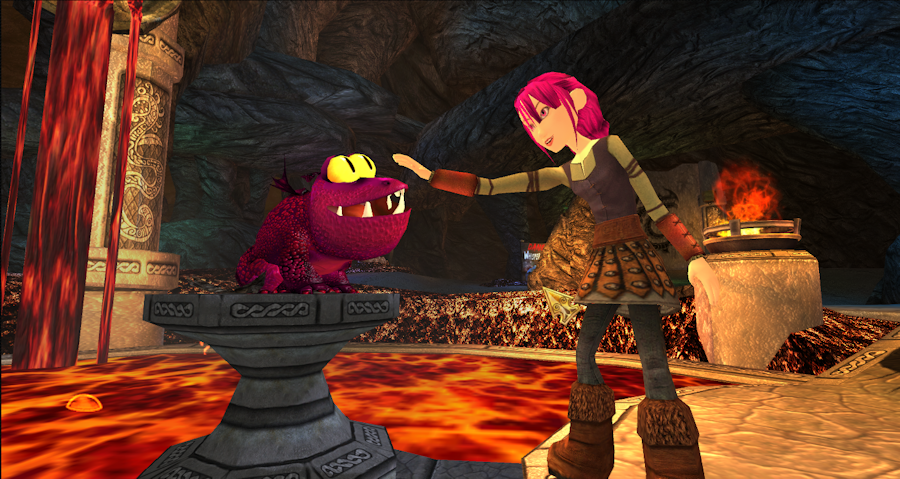 School of Dragons is a 3D multiplayer online world based on How to Train Your Dragon from DreamWorks Animation, but made by the JumpStart team. As this is such a big world, with a lot to do, I’ll be tacking the game in two parts. In this first article I’m going to focus on the character creator and training zone.

Once again I’m amazed by these kids games and enjoying discovering what they have to offer. When you play this game it feels like you are in the movie, playing along with Hiccup and all this friends (even Toothless). You run into dragons everywhere and every single one of them is unique, due to the excellent color options, in this game.

The game is free to play, but has more content for members if you choose to pay. One month is $9.99 and savings on this can be had for paying in 3, 6 or 12 month increments instead. Membership bonuses are, for the most part, the same – with the addition of your own Toothless and a free stable if you pay for multiple months up front.

When starting out you can pick between a male or female viking character. You then select from 6 sets of eyes, 2 styles of hair and a skin tone, each with their own unique color palette to select from. I do love color selection in character creation to allow you to pick as wide a range as possible and really make it your own, that you can enjoy playing with.

After you pick a name and finalize your character options, you are taken to a series of scenes from right out of the movie (which can be skipped). Once in the gameworld proper, Hiccup as an NPC talks to you, and narrates the game for you. You use typical MMO-style controls – the mouse can pan around, with WASD to move you around (and this does not appear to be re-bindable). There is an arrow that shows up behind you telling you the direction of your quest or next mission.

Hiccup and the NPC’s will talk some of the dialog to you and it appears on the screen to read along with them.  Your first mission is to talk to Toothless and get started.  Here is where I had a fangirl moment, as a fan of the movies, for a fictional character – I got excited that Toothless was my friend, and you get this bright shiney achievement to prove it. This resulted in me saying, “It can’t get any better then this, Toothless if my friend… it’s the first achievement! It gets better than this!” as the sequence panned out. It actual got even better as your first riding lesson is on Toothless, himself!

When flying around on dragons you have a special ability buttons such as a boost button to fly faster, or a fireball one to shoot fireballs, depending on which dragon you are flying. Your first lesson is a series of obstacles to fly Toothless through. I had a little trouble at first with the flying, the controls were acting odd but zooming out and inverting the flight controls helped out. It took some practice but it was easy to pick up after awhile. I enjoyed the parts where kidnapping a sheep gave you bonus points, in the obstacle runs. In the game you have two different types of experiences – normal XP and Ultimate Dragon Trainer XP. UDT XP is for competing to be on a list with the best players in the game – though Hiccup is first on this list (as it should be).

After you learn to fly you get a mission to head into the hatchery and pick out your own dragon. When picking out your dragon, you can just pick one or take an in-game multiple choice test to pick your perfect companion.  I wanted to see what type of dragon the game thought suited me, so I took the test.

A Gronckle was apparently my best match so I decided to hatch a baby Gronckle. You can still pick between a Thunderdrum, Zippleback, or Monstrous Nightmare too if you didn’t like the quiz’s choice. Members also get the option of a Whispering Death, which looked great.

You then pick the egg up that you want and head over to the lava to watch a cut scene of your baby dragon hatching, after you have gone through the dragon character creater. This allows you to name the creature, pick the sex, the skin color and markings (with a similar color palette as you had in character creation) to make them unique

The main objective of the game is to train every type of Dragon available, as every dragon brings something unique with it and has different training that goes along with it.  There are 8 training runs and dragon class levels to learn how to fly each type. I was proud that my run with Toothless got me all A’s!

The game incentivizes frequent play with daily bonuses and there are also mini games to play – including a popular fishing minigame. Buy worms and minnows to go fishing with and reel in the fish before it breaks the line. Different fish that you can catch (by varying your bait) will heal your dragon faster, when you feed it to them.

I have to say that I really enjoyed the first part of the game and am looking forward to adding dragons to my book and moving up on the UDT leaderboard. I recommend you give it a try too as how can you resist Toothless?

You can play the game directly on schoolofdragons.com, via a desktop Unity client or even on compatible iOS and Android devices.