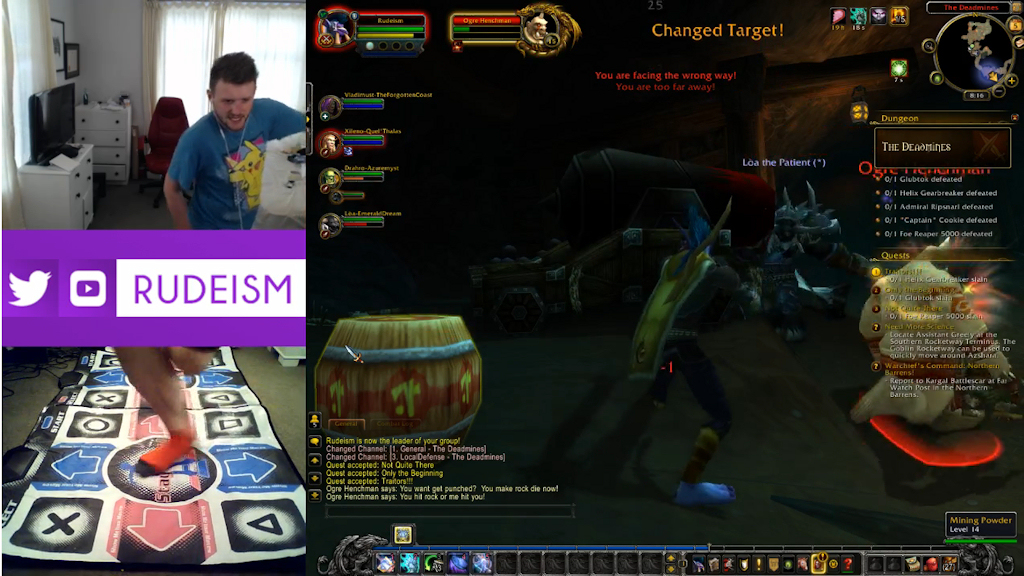 I came across Rudeism’s World of Warcraft challenge via a random tweet among my Twitter followers. When I tuned in I couldn’t quite believe what I was seeing, someone was playing a traditional MMO with the power of dance. Well, dance mats anyway.

I wasn’t alone in watching this phenomenon as several hundred people were also cheering him along in his manic endeavor. I wanted to know more, so I reached out to Rudeism who has kindly granted this interview so all of us here at MMO Central can get the lowdown on what is “Dancecraft”. MMOC: What Twitch handle do you go by?

MMOC: What type of stream do you broadcast?

DB: I’m a variety streamer, with one common theme across all games: proving that any game can be beaten on any controller. I’ve made it a hard rule on my stream that you’ll never catch me playing a game the way it was meant to be played. Rocket League and CS:GO with a Guitar Hero controller, Mirror’s Edge with a steering wheel, Warcraft with dance pads – I want to blow open the perceptions of what we can do with games, and I’d love to see other people try this stuff!

MMOC: Do you broadcast Full-time or part-time?

DB: I’m a part-time streamer, and a full-time game designer by trade, working on mobile games in New Zealand!

DB: While I complete Dancecraft, I aim to stream as such – all times shown are for New Zealand, UTC+12:

Typically though, I’ll stream Wed/Thu/Sun, with Sunday starting around 4:30PM.

MMOC: How many years have you been streaming?

DB: I started streaming in August 2015, but only began practicing my any-controller philosophy in November. MMOC: In your own words, how would you describe your “Dancecraft” challenge?

DB: The Dancecraft Challenge requires getting to 100 using only your feet and dance pads. I was sitting at work one day thinking “Man, that’s a stupid idea.” People have joked about WoW on dance pads for ages but noone’s ever really attempted to give it a shot, as far as I know. Why can’t it be a thing? With the proper planning, it’s very possible.

Here are the rules of Dancecraft (I encourage anyone to try this at home!):

MMOC: How long and how tiring is an average play session/stream?

DB: Weekday streams typically go for 3-4 hours, whereas weekend streams can be upwards of six hours. How tiring that is depends on what I’m doing – I can quest all day, but since I’m rolling a Brewmaster tank, dungeons can be fairly taxing since I try to do the best I can, while also keeping up with the PUG dungeon rush. I also have the disadvantage of not playing WoW properly since Wrath, so all of the old post-Cataclysm instances are new again for me. I’m looking forward to raiding once we get to that level!

MMOC: What is your current level and current /played time?

DB: I am currently level 40, as of Friday 11th March NZ time. I started playing on the 5th. I’ve decided not to check my /played until I ding 100, but judging by my stream times, I’d say that I’m approximately 20 hours in. I have no idea how long it’ll properly take me – I’m still a little rusty on the old Warcrafts!

MMOC: What led you to choose Warcraft over another game?

DB: Warcraft is still the first example people tend to think of when they think of MMOs. My theory is that if Warcraft is playable start-to-end with dance pads, then any other MMO can be beaten in the same way. WoW is also the MMO I’m most familiar with, even though I’m not as familiar with it as I used to be. I’m also a bit of an old man when it comes to WoW – I miss the good old days of world PvP and making new friends, and I want to get back into that. I’ve managed to have my fair share of both of those things – this is the most fun I’ve ever had with WoW, over 11 years after its release! There’s still a lot of life in this game.

That said, I might try another one once I’ve hit 100 in Warcraft! Who knows?

MMOC: What class are you playing, and why?

DB: I’m playing as a troll monk. I figured it’s the danciest combination of class/race. Monk has the benefit of being able to tank, which is what I wanted to do with Dancecraft. It’s working pretty well so far! I found out once I dinged 20 that you can get the daily XP buff, which I wasn’t aware of beforehand, but has come in pretty handy.

MMOC: What are your current tanking and/or DPS ability rotations?

DB: Honestly, I’m still working those out. I’m not as good at keeping my abilities up to date, since using the dance pad to move hotkeys around can be tough. Keg Smash, Provoke, Jab, Tiger Palm, Blackout Kick and Breath of Fire are my main abilities, with Guard, Fortifying Brew and Elusive Brew on cooldowns, but I know that I need to throw in more moves like Expel Harm (I know, bad me!). My control scheme allows for shift and control hotkeys too, so I should theoretically have enough hotkeys available to me to be able to raid tank!

MMOC: What has been your most difficult challenge in this playthrough so far?

DB: PvP is pretty much a no-go, since I’m not fast enough with my feet yet, and most other players have heirlooms whereas I don’t. I’ve been talking to my friend Gigasnail about getting into some ranked Battlegrounds once I pop 100, and maybe getting the Hero of the Horde title! We’ll cross that bridge
when we come to it.

PUG dungeons are also really tough – if people don’t know what you’re doing, they rush ahead, which makes it really hard to keep aggro. That said, when I’ve had groups of people that know what I’m up to, it’s actually not that bad! I can even keep out of the fire (most of the time)!

Not being able to talk to anyone ingame is also hard, but thankfully I’ve made friends through my stream that help me out with that one. This dance run is showing me that the social aspect of Warcraft is still going very strong, which is AWESOME! It’s probably my favourite part, meeting all the supportive people along the way. I’ve even made some Alliance friends on my server!

I recommend that you check out Dylan Beck and his community for this unique take on MMO gameplay over on his Twitch channel at http://twitch.tv/rudeism