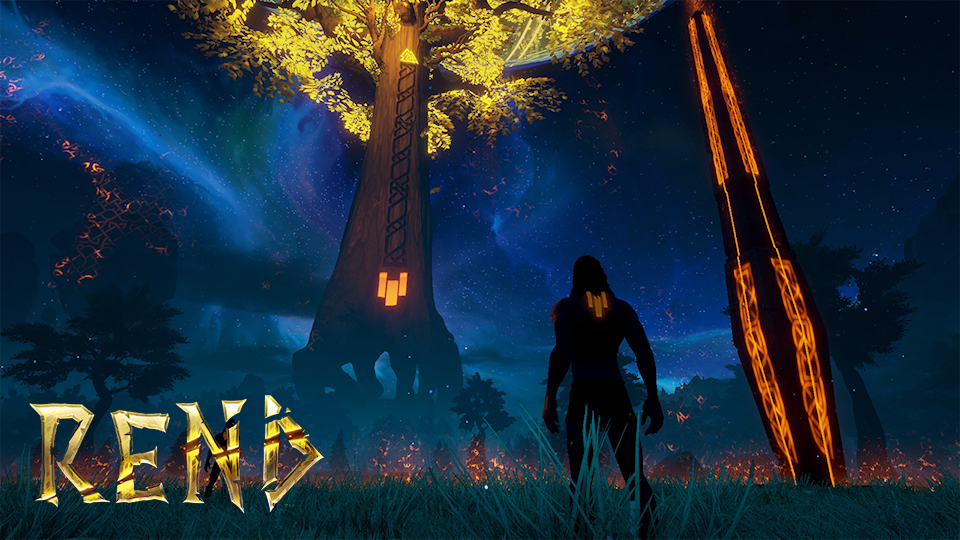 It was a frigid morning in Boston, and while I had only barely defrosted myself on the show floor I still found myself leaving the confines of the convention center to find the noted No Name Restaurant. Because it was here I was to meet with a No Name studio, working on a No Name game.

Not even in the booking of this appointment had any details been released and it wasn’t until I stepped through the doors that all was revealed – in the form of Mat Malizia, Jeremy Wood and Jordan Leithart of the recently formed Frostkeep Studios.

I was there to see their (formerly) under wraps title Rend. Built in Unreal Engine 4, Rend is a Survival game and was described as taking place in a Viking adjacent world. More specifically it is an afterlife, a proving ground for a war where three player factions (the Conclave, Order and Revenant) are pitted against each other in a war for supremacy among each other and the monstrous forces of the Lost.

Unlike most survival games, the team at Frostkeep are taking a leaf from their collective MMO pasts and bringing to it lessons learned from Warcraft, WildStar and even League of Legends – Rend has a win condition, after which the server will reset and the game will begin anew. Each faction is competing against the others -, not just to destroy their enemies, but to collect Spirit Points, which are stored in their factions’ Divinity Stone located at the base of their World Tree. The World Tree itself, a Yggdrasil inspired behemoth that dominates the skyline of each faction’s valley, is marked by the owning faction’s sigil and shows their soul collection progress.

Speaking of valleys, lets talk a little about the map for Rend. Currently, the game is a 20v20v20 “match” that spans around 2-3 months of gameplay. The map itself consist of three wide valleys that surround a central plain – from the plain the players can access a cave system that, in play, is more like a traditional dungeon, housing three wings full of environmental (such as lava and darkness) and creature-based (spiders were shown during the demo) dangers that lead up to The Eternal Wastelands – a realm of powerful (lootable) artifacts and creatures. Click me to see the original sketch, done by Frostkeep Studios and MMO Central on the day

Each valley is arranged in the same vein – the resource distribution is even, and on the flanks of each valley is a portal that will teleport the player to the adjacent enemy valley – a good way to check out the progress of your enemy’s World Tree.

Over and above these areas, there is a third that permeates the entire world – the Spirit World, a spirit realm that can be accessed via special portals that occasional tear open when something dies. The Spirit World is described as super hazardous, and time spent their is limited both by the environmental damage taken and the short duration of the open portal (though characters can eventually learn to spend more time there, and even open their own portal at will).

The Spirit World also serves as the only place to acquire a mount for Rend – by chasing down the spirit of a felled creature, you will be able to bind it to your service.

Characters in Rend have three forms of progression that are tracked for them. The first two are for the duration of a server cycle only – Skills and Talents. Skills are leveled up through repeated use and are of the type you might expect for survival game such as Carpentry and Stonework. Talents are separated into playstyles (Assassin, Survivalist, Soldier and Mystic) with each role accompanied by an extensive skill tree to let players specialize their character.

The third and final system is the meta progression system which on the completion of the server cycle grant progression points for players to unlock further options for the Skill and Talent systems for the next time around – allowing older players to open up new strategies and abilities without invalidating newer players.

During the demonstration, I asked about building your factions’ base – concerned that in some circumstanced a rogue player could completely dismantle defenses or troll with their wall placements. I was reassured to learn that such abilities like constructing bases and dismantling portions thereof are gated behind a faction contribution level system. The more you work towards the objectives of your faction, the more you will progress into the leadership of that faction – unlocking the ability to add to the base and at higher levels being able to demolish sections. There was also talk of being able to set strategic planning for the faction at higher brackets, putting out public requests for certain resources, etc. Moving on the the topic of bases, we should discuss the forcefields that protect each of that faction bases. In order to prevent the common genre trope of your hard work being destroyed while you and your allies are offline, Rend uses a mechanic they call the Reckoning – a two hour window each week (private servers will be able to modify this timeframe and frequency) where the all the shields are dropped and the bases (and Divinity Stones) are vulnerable.

The Lost, an NPC race, will also assault the faction base, and will grow in power each time another Reckoning occurs which means that the server should see massive pitched battles as the factions race to both assault their foes stronghold as well as defend their own – giving them the opportunity to drain the enemy Divinity Soul to score more points on their World Tree.

This is done with a special spirit tool, which can also be used at night to hunt wandering spirits to further bolster your score, or used as a special crafting resource. There is also the option to encounter powerful spirits that, after completing a quest, can be recruited as an ally for your faction’s stronghold – working as a blacksmith or even fighting to defend your Divinity Stone.

Rend is scheduled for early access release in Spring 2017, via the Steam platform for PC.