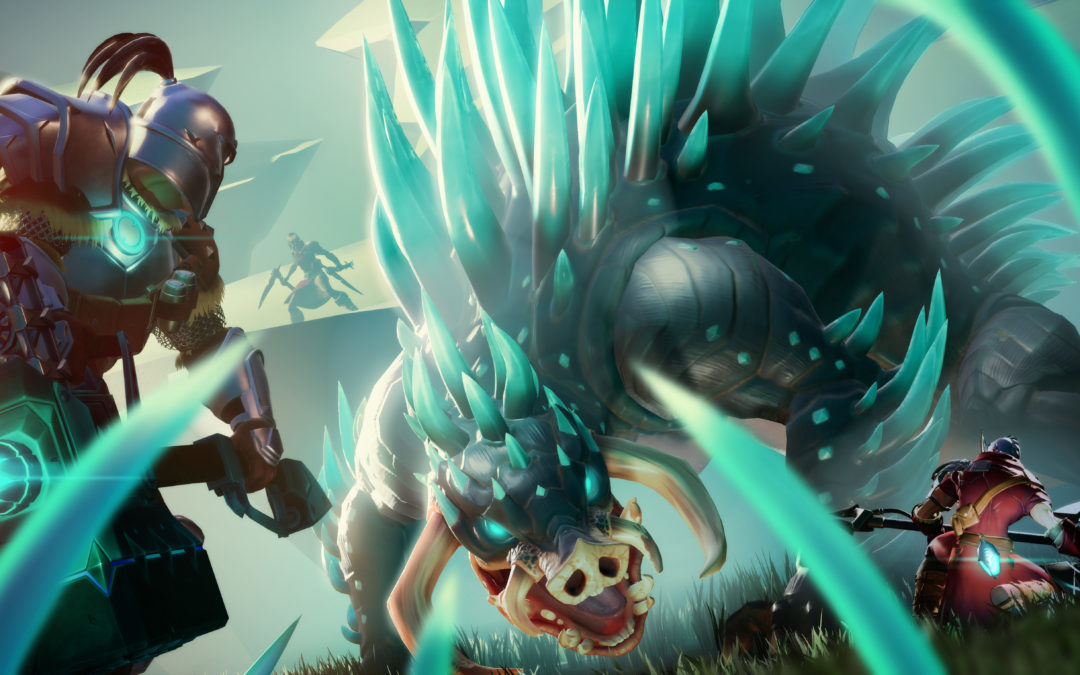 PAX East may be over, but our excitement for one of the biggest names on the show floor hasn’t diminished. Phoenix Labs’ Dauntless had one of the larger booths in the convention center, and it also had a very full line most every time we looked. Dauntless remains an unusual action RPG, using a small-party mechanic to group people together to hunt Behemoths of various abilities, then taking the spoils back to the hub town of Ramsgate to complete quests and level up one’s gear through crafting. While the demo on the floor didn’t truly give a good view of this other behavior, what we got was the main gameplay loop, which was to go a-huntin’.

Unlike many games, there are no classes. Your chosen weapon will determine what your gameplay will be like. If you choose the Repeaters, you’re going to be ranged DPS, but they noted that there are still bonuses from being in melee range. If you choose the Hammer, you’re going to be melee DPS. There’s no real support/healing sort of gameplay here, beyond everyone having self-healing and also group healing through a long-cooldown AoE. Since the last time we visited with the folks at Phoenix Labs, they added some more Behemoths to the game and a couple new weapons. Last year, Chain Blades were all the rage. This year, it’s the Repeaters. During our demo, we took on Charrogg with Repeaters, and later took on the newest Behemoth Boreus with the Hammer.

Let’s talk a little bit about the Boreus fight. Like all Behemoths, he has a basic elemental theme (in this case, an icy one). However, he’s the first Behemoth that spawns minions that you have to deal with at certain points of the fight while he himself ices up and is immune to your attacks. All three sets of adds fly. One kind does ranged damage, another expands like a pufferfish and explodes, and another one debuffs you.

It was definitely easier playing with devs on the team who knew their game front to back. The controls were pretty easy to pick up even after a long downtime. The only thing I was having difficulty with was the long wind-up to most of the skills with the Hammer. With Boreus’ adds and the Behemoth itself moving pretty quickly, it was a bit of an adventure to stay near enough or facing the right direction in order to land any hits. They certainly nailed the physics of swinging a hammer of that size. As a player, you had to account for the wind-up, the swing, and any potential follow-through and setting up your next move. For someone used to games being a little bit more forgiving in that matter, it took a little getting used to. Batting the pufferfish-like minions back at Boreus just in time for their explosion was actually hilarious.

Dauntless has been trying to stand out in the monster-hunting genre and has been doing that in a number of ways. One of those was by hiring Cris Velasco (Fortnite, Borderlands, God of War)  to do their music, and it’s so good!  Most recently, they released an interactive roadmap on their website that doesn’t just give a bullet point list of what they’re working on in vague PR terms. It showcases which things are coming sooner, which are further down the line, and it quietly notes a few things such as simultaneous PS4, Xbox, and Epic Game store launches and crossplay across all platforms.

The hype train is rising for this game due to add these features in the summer, but the next big update is due next week. Entitled Path of the Slayer, it will add more tutorial options for newer players and a new progression method and quests to benefit both newer Slayers and more grizzled veterans. There’s also a rework to crafting and a vastly improved end-of-hunt screen with a ton more info to show for your efforts.

Path of the Slayer is due to arrive April 24th after a 2-day extended downtime to prepare the game for its arrival.  They’re a free to play game, and you can check them out at playdauntless.com.