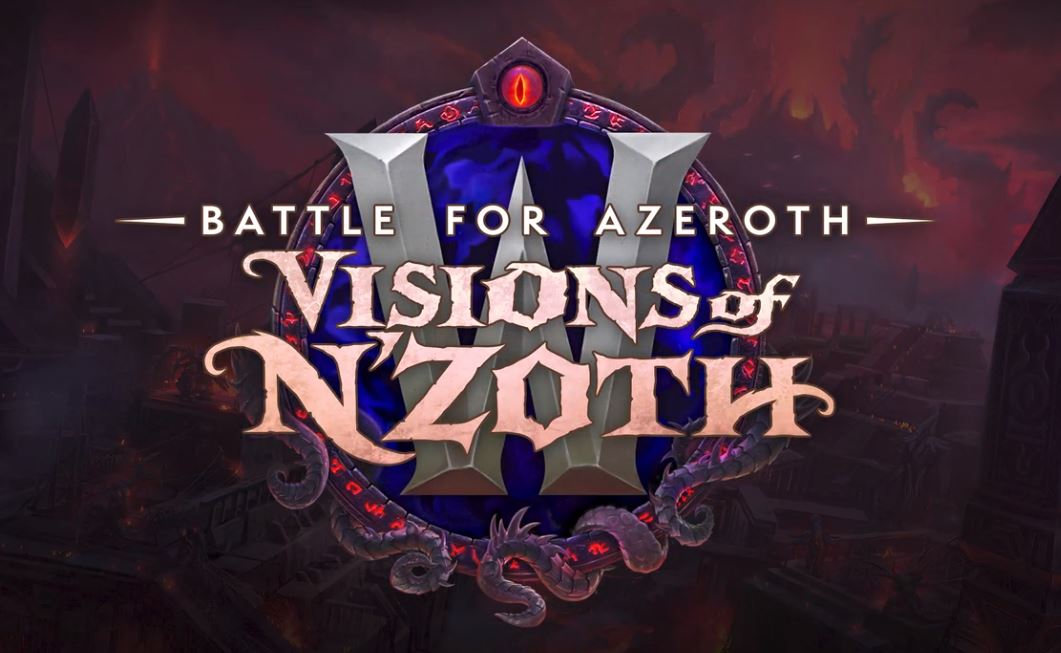 After a fractious second half of 2019, Blizzard Entertainment’s due to come out swinging in 2020 by releasing the next big patch for World of Warcraft, 8.3: Visions of N’Zoth. The story of the current expansion Battle for Azeroth heads toward its resolution ahead of the later release of the next expansion, Shadowlands. In 8.3, WoW players will have to wrestle with the usual class changes as they gear up to tackle more content. This expansion unlike the previous 8.2 doesn’t really add any new landscape to visit, but rather does a sweeping set of changes to existing areas in time with the story of players heading to Ny’alotha, the Waking City to face N’Zoth in a new 12-boss raid.

Basically, the story is clearly inspired by Lovecraft, with the Old God N’Zoth (voiced by the ever-delightful Darin De Paul) angling to bring back the heyday of the Black Empire from a very long time ago, and players will be tasked to oppose its plans. Azeroth’s champions just got done beating the actual proper Burning Legion (not just a vanguard or stragglers), so this should be a walk in the park, right?

In terms of changes to the game, Blizzard is unleashing two more requested allied races, with the Alliance gaining the mechagnomes who rebelled against the Cyberman-like King Mechagon and his nefarious plans to make the whole planet’s creatures like him, and the Horde gaining the cute but fierce Vulpera whose primary claim to fame is a sweet song about best friends and the love of alpacas. Both races require being exalted with their faction (Rustbolt Resistance and Voldunai respectively) and just like in Legion, the Alliance has to put in more work than Horde to get their unlock. Mechagnomes are gated behind a mid-expansion faction (unlike Vulpera) and also requires a dungeon run. Alliance players will be relieved to know that the required dungeon will be chopped in two and become available on the group finder on Heroic difficulity with the patch, but Horde players have no such challenge to face in order to unlock their new allied race. They simply have to complete the zone story, get exalted, and begin the unlock quest. It should be noted that if you’ve gotten exalted with Rustbolt as Horde, that counts toward the Alliance unlock. Mechagnomes will launch with 8 classes (Death Knight, Hunter, Mage, Monk, Priest, Warlock, and Warrior), while Vulpera will launch with 9 classes (same plus Shaman). The forums on both the official site and fansites like Wowhead are of course having a field day with this, as well as the various racial traits, ‘discussing’ which race is too OP.

Death Knight players who have been aching to play one as a pandaren or any of the allied races will get their chance with 8.3, as they will become available to all races across the board. Players will need to pre-purchase Shadowlands to gain access to these new DKs before the expansion launches. Pandaren and allied races will play through a different starting instance before being released into the regular game world, interacting with current Lich King Bolvar Fordragon as they missed the boat in terms of the Wrath of the Lich King story. Like OG DKs, the pandaren and allied race DKs will also start at level 55 (until the level revamps in Shadowlands), and like all previous races, they will be eligible for unlocking racial heritage armor if they level normally the rest of the way.

Speaking of heritage armor, Cataclysm-era races goblins and worgen will receive access to their own sets, and worgen will finally have a permanently-available top hat transmog, something mog fans have been asking for since worgen first launched. Also, players who acquired old legendary items (did someone say Thunderfury, Blessed Blade of the Windseeker?) will now be available to transmog them. However, just like now, if a legendary dropped on a character that can’t equip it, it won’t be added to the appearance window for alts to use. So that paladin with both Warglaives of Azzinoth or that druid with Thori’dal in their bank are out of luck. Also, the system will still honor and abide by current class restrictions, but any item without class restrictions that are held by a class that can normally equip it will automatically become available to other characters of sufficient level and weapon type, so that’s still pretty awesome.

Much like how we’ve had Legion invasions both before launch and ever since in the Broken Isles in Legion, patch 8.3 brings forth N’Zoth Assaults, periodic attacks upon the titan facilities in Uldum and a restored Vale of Eternal Blossoms in Pandaria. In these, players will contend with N’Zoth’s forces, including a world boss in either zone that’s lore-related to nearby content, and play through to acquire new loot and complete objectives. Another Legion-like activity will be the new Horrific Visions. These will be corrupted versions of both faction capitals where players will be expected to go in repeatedly and complete content and eventually progress via upgrades earned through each run. It’s been likened to a mashup between roguelikes, progression raiding, and the Mage Tower from the previous expansion. Horrific Visions will be available to solo players and groups up to 5, with commensurate rewards.

Tied to the Horrific Visions content is the new legendary cloak provided by the Black Prince Wrathion. Its main purpose is to provide resistance to the corruption and insanity mechanics within the Horrific Visions content. The cloak will have 15 ranks to fill up over time, with an increasing item level (starting at 470) and Blizzard has previously announced there will be more to do with the cloak after that. For the moggers, the cloak has three appearances, two that unlock at rank 6 and 12 respectively.

More changes are coming, including the 12-boss raid in Ny’alotha, a new PVP season, new mounts and pets, a much superior UI for the auction house, improvements to the Heart of Azeroth, and the switch from Titan/Warforging to Corruption for loot from the new raid, N’Zoth Assaults, M+, and Horrific Visions. It’s a lot to pack into what is likely to be the last major update to the game until the pre-launch events start occurring in the lead-up to Shadowlands launching later this year. Those who have been at the forefront of the entire expansion will probably be through all of this pretty quickly, but the rest of us fortunately have a good bit of time to get ourselves and hopefully some of our alts through all of this. If you’ve like to read more about what’s involved in this new patch, Blizzard has their update notes available right here. If you need help figuring out how to accomplish any of these bits of content, the fine folks at Wowhead have a Survival Guide up as well.

What’s your favorite part of this patch coming up?