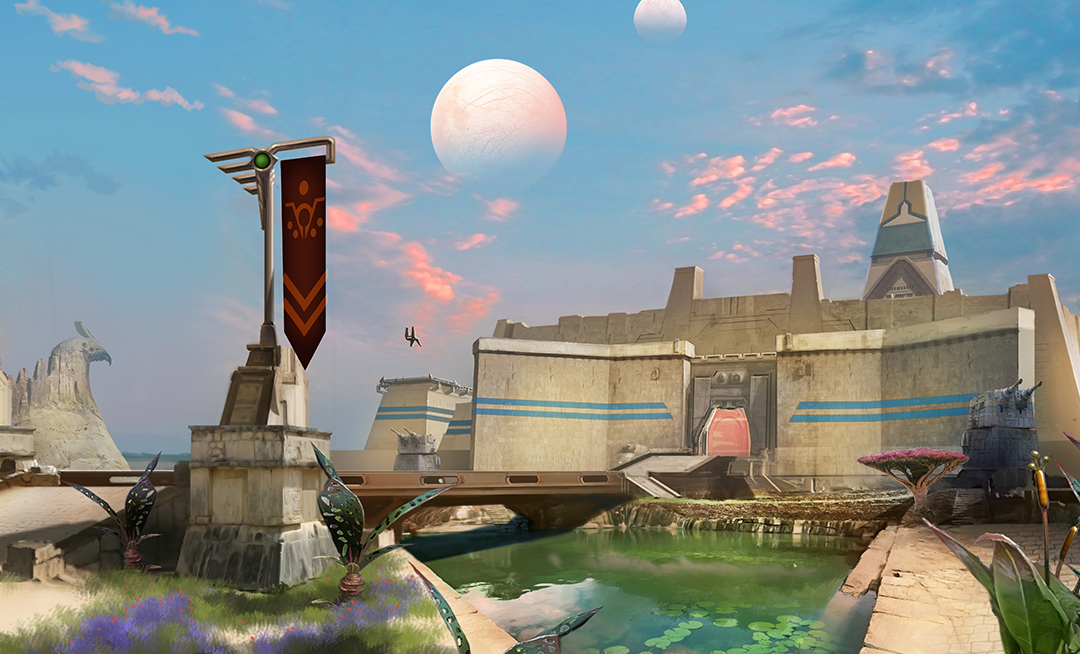 While it wasn’t a supremely transformative year for MMOs, in 2019, the industry has started to see more and more of a paradigm shift in the kinds of MMOs being released, worked on, or even theorycrafted. For years, players and the general public equated MMO to games that followed World of Warcraft‘s model, which was a more cemented version of EverQuest‘s model, and the industry shied away from innovation because that was risky. The juggernaut that is WoW has been the blame for this near-stagnation of the MMO gamespace, much like the simple fact that hardly anyone offers a monthly MMO sub for more than $15 USD instead of slowly increasing prices like many other industries have done for subscription services over the years.

Companies are finally seeing that they’re better off finding ways to be different. For years, a number of MMOs launched and players would claim these new MMOs would be the ‘WoW-killer’, but after WildStar‘s spectacular rise and fall, it’s clear to see that developers and publishers want to avoid that sort of label as if it’s a jinx. That being said, players themselves have added to a more basic conversation of redefining what an MMO actually is, to start thinking outside the narrow confines of the box WoW converted into dogma, and companies are listening. Games take time to craft, so much like a sports team during a rebuilding season, we’re more likely to see the results of this shift later this year or further down the line.

Still, games are more willing to take risks or to more hesitantly label themselves as MMOs even if they otherwise fulfill most common criteria for the basic question of what an MMO actually is. The ‘massively’ label isn’t as ardently chased as it used to be, with games focusing rather on the ‘multi-player’ aspect of things. Some developers insist that a game cannot be labeled as MMO unless it has some persistent play areas, so Phoenix Labs’ Dauntless would qualify as its Ramsgate is a persistent player hub with lore and story involved in its quests, while its main gameplay loop is small teams of Slayers going to instanced floating bits of landscape to fight the Behemoths. On the face of it, Dauntless plays like a more modern Dungeons and Dragons Online, which is a heavily-instanced dungeon-crawling experience with larger persistent landscape areas linking the actual quest instances.

On the other hand, much of the MMO conversations also swirl around the question of monetization, with WoW and Final Fantasy XIV being the two biggest games still clinging to a primarily subscription model, while pretty much everyone else being a freemium model or buy-to-play with paid DLC such as Star Trek Online or Elder Scrolls Online. 2019 also saw huge backlash from players regarding lootboxes and possible gambling in their games, backed by legislators worldwide examining these issues and some taking action against what they perceive to be a predatory practice, mostly focusing on protecting minors. By and large, players despise RNG, and they react understandably negatively when they feel they’re throwing money away on RNG-based chances to acquire some desired item in a game. This also heads into the ‘pay to win’ discussions, where sometimes even conveniences being in a game’s cash shop (versus actual high-end gear or keys to open lockboxes that will award gear) is considered too much.

So what games have made some real splashes in 2019? We of course have to commend the folks at Hello Games for accomplishing the seemingly impossible for a relatively small studio: they salvaged their game No Man’s Sky from one of the worst launches ever and made it into what was originally promised to be, something only previously accomplished on this scale by Square Enix and the original disastrous first iteration of Final Fantasy XIV. Unlike the folks at BioWare working on Anthem, sometimes there’s just no real saving of a game if it has a bad launch because it’s so difficult to overcome that first impression. Of course, BioWare also had the unfortunate timing of Respawn practically stealth-launching Apex Legends shortly afterwards. Hardly anyone saw the latter coming. The three other biggest names in sci-fi MMOs are still trundling away, with Elite Dangerous overhauling its starting experience to be more newbie-friendly, Star Citizen still selling ships for a barely-playable space sim but finally adding a female avatar, and Dual Universe quietly making former Landmark players happy building spaceships and starbases in its closed alpha experience.

Other fantasy-based MMOs are still building their way up in some form of early access or other. ArtCraft Entertainment’s Crowfall spent 2019 continuing to build on its PVP-based throne war MMO, while Frostkeep’s Rend swiftly faded after its launch and the studio recently suffered layoffs. That’s a pity, considering the lush graphics of the game and the stunning soundtrack composed by Neal Acree that recently had a multi-medium release. Mark Jacobs and the City State Entertainment crew continue plugging away at Camelot Unchained, showing off some incredible footage of massive armies fighting and destroying a castle wall during their panel at DragonCon back in August. Overall, it’s hard to make a lot of waves unless one is part of one of the larger corporate-backed studios, but these developers still pour their creativity into their games regardless.

Another of the changes that came about in 2019 was the increased rise of mobile-based MMOs. Despite the exceptionally poor reception Blizzard got for its not-quite-MMO Diablo: Immortal at BlizzCon 2018, other companies such as Jagex had two versions of RuneScape on mobile in late 2018. It’s no surprise that this year, Pearl Abyss chose to bring Black Desert Online to mobile, and there’s been a general tenor to people’s reactions being somewhat surprised at how good it is. One can pretty much point to the popularity and presence of the Nintendo Switch as being a catalyst in this as the AAA companies are not only willing but eager to bring their flagship titles to mobile. As a fully-fledged readily-portable console, it helped bridge the gap between consoles and mobile and subtly pushed back against the conventional wisdom that all mobile games were inferior or simply raiding a customer’s wallet in order to continue playing.

However, despite more companies looking outside the box for ideas for their MMOs such as the recently-Kickstarted Book of Travels from Might and Delight, there are a couple of big projects that are looking to make moves in 2020, but for now, their concepts are mostly still in the works and overall game style hasn’t been finalized. Players are definitely interested in seeing what else Amazon Game Studio is up to with New World, although 2019 wasn’t a great year for them, with talk of layoffs and reorganizations going on, but they still seem to be on track to provide more details this year.

They made more waves with the announcement last July that they have a hand in the new Athlon Games Middle-earth MMO, although it’s still very much unclear when the game will be set in the four known Ages of Tolkien’s world despite the use of the Lord of the Rings name in much of the press copy. They also haven’t taken many efforts to make it clear whether or not the MMO will have any ties to the separate Amazon Second Age-based TV series, although it has been made clear that filmmaker Peter Jackson is not involved with either. Of course, people who hang out in the Lord of the Rings Online community are watching this story with deep interest, and it’s often a frequently-asked question in LotRO streams, both official and not. Standing Stone Games community manager Jerry ‘Cordovan’ Snook has publicly reminded folks on his stream that their other game Dungeons and Dragons Online isn’t the only D&D MMO out there, so it doesn’t affect them as much as people might assume. It hasn’t allayed as much concern as they might like, as players remember the end of Star Wars Galaxies and the timing of the launch of Star Wars: the Old Republic. However, the folks at SSG spent 2019 releasing both an expansion and a major game update for both of their games, so they’re going full steam ahead and seemingly not worrying about it.

Speaking of SWTOR, however, BioWare Austin had a great year with an itemization overhaul and launching their fifth full expansion, Onslaught. It’s good to see them finally being included and even actively promoted in marketing efforts from their parent companies EA and the official Star Wars social media accounts. Another triple-A game that did a major expansion in 2019 was ZeniMax’s Elder Scrolls Online, whose Elsweyr brought the feline khajiit race and the necromancer class to Tamriel.

Intrepid Studio’s Ashes of Creation is poised to have a banner year in 2020, but they faltered a little bit in 2019 with their Apocalypse project, uneasily reminding people of SOE/Daybreak dreaming big for EverQuest Next, spinning off Landmark, and then laying off half the studio and canceling both projects after the company was sold. Not surprising at the concerns, given how many Intrepid devs came from SOE/Daybreak. Daybreak itself caused a bit of a stir when players discovered they had registered trademarks that seem to imply a shift in business stategy. The going theory is that Daybreak might spin off its games into separate studios and then step back into the role of publisher, the way they publish LotRO and DDO for Standing Stone Games. Unsurprisingly, Daybreak released new expansions to both EverQuest and EverQuest II, lauding the 20th anniversary of the former, although it also suffered layoffs and canceled the Planetside Arena project.

Of course, one of the biggest MMO stories in 2019 was Blizzard releasing WoW Classic, initially to much acclaim from long-time players of the game and an amusing series of ‘bugs that aren’t really bugs’ being reported from either vanilla-curious players who had never played back then, or old-school players misremembering how it went. Unsurprisingly, many players went back to retail WoW after a short time, because there’s more to do and despite Blizzard adding more vanilla content to Classic, many players got their fill of nostalgia and/or simply don’t have the time to play both and had to choose to stick to where their guild and friends were.

In all, 2019 was a year of change for MMOs. Whereas in the past few years, MMOs had to be cut and dry with certain gameplay experiences much like WoW for the gaming public to consider them MMOs, there have been enough waves made by both triple-A and indie games to see that the MMO label may be fading a bit… or at least the intention and expectation of that first letter that there should be millions upon millions of concurrent players. These days, most companies are zeroing on their core experience and the fans of that sort of gameplay and developing with that in mind far more than they have in the past. Honestly? That’s a benefit to us as players because we see more variety beyond the latest iteration of ‘kill 10 rats’ to start us out on our journey. It’s a benefit to studios because they can truly flourish creatively and maybe even take a few real risks for the first time in probably five or six years.